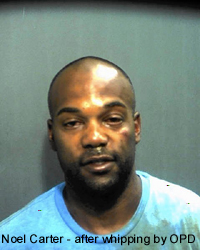 Noel Carter was beaten like a dog. And I say that because if ANYONE had abused an animal like that, there wouldn't even be a question about their guilt-ask Mike Vick.

I'm not against protecting our law enforcement, their job is reaped with peril and danger. But when you have a verdict of a man convicted of battery on a law enforcement officer, and there is video of him being kicked repeatedly-while handcuffed and sitting on a ground. It's hard for me to see who is in danger at that point.

Trials like the one(s) that happened this week are what make practicing law difficult. Despite the verdict outcome. You become emotionally attached to these cases because you see yourself in the clients shoes-and you become scared of your own vulnerability. You understand a verdict of guilty will possibly embolden LEO's to think they acted in the right way, and thus continue their course of conduct on citizens of the community-no matter how egregious.

However a victory not only free's your client, but it is with hope that it may cause that same officer to pause in their thinking before taking that same course of action on another person (knowing the possible end result-optimistically speaking of course).

Cases like these are not hermetically sealed decisions that stay within the four corners of the courtroom. Their decisions reverberate throughout the community, affecting everyone around it. You know what's the truly scary part? there is no telling how far the rippling effect will go. And THAT is why these cases are so important.