PEOPLE WHO PASTOR THEMSELVES 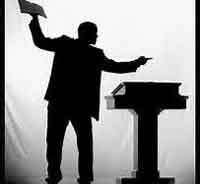 by Pastor Joe Flores
--People have told me that I am hard on preachers. I must confess that although I maintain a healthy respect for the calling and gift of the pastor to the church, the position of the pastor has been vitiated by the lack of character and the demoralizing behavior of many of the men and women who occupy the pulpit and carry this moniker.

Greed Is Good. Really? Read The Eight Beatitudes of Jesus 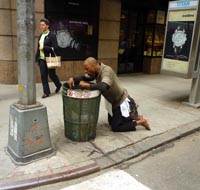 by John Manzione
It is now true that seniors are found eating cheap pet food from China to live and then vomiting that filth back up. And if they eat it in a park they are arrested for trespassing, vagrancy, ad nauseum. In jail they still go unfed. They are given cheap baloney -cat food again- with American cheese three times a day on very lousy no nutrition bread. This way the poor bastards won't try and get arrested for a meal.

The back of the American Picture of Dorian Grey grows more hideous each day our noveau meanness continues.

HOW TO GUARD AGAINST LEADERS PROJECTING WEAKNESS ON YOU

by Pastor Joe Flores
In psychology there is a concept known as "projection". 'Projection' is when a person projects their behavior and responses onto another as if the other person feels, reacts and responds as they would. In short, the projectionist says, because I feel, act, react or respond this way you must feel act, react or respond in the same way, because that’s how I am. The wilderness is often thought to be a deserted uninhabited place of desolation. However, the word's etymology is from the "wildeornes", which in turn derives from "wildeor" meaning wild beast (wild + deor = beast, deer) from this point of view, the wildness is a place of wild things, things untamed by human civility.

For some of us our wilderness is more than just desolation and or isolation, it is a place that lacks human civility. It is a place of dealing with unimaginable wild things.