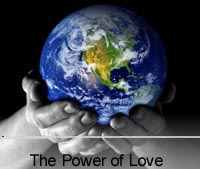 You and I are aware of the reality of heaven and hell, and we also know that in between the two stands a Savior. We know the truth because the truth has set us free. The truth has made us into new creations and continues to usher us into greater measures of strength and freedom every day as we sincerely follow Christ. We do not hold to a mere concept about God, we have the living reality of God inside of us. And so the question arises: Why is it that we, knowing the truth of the gospel of Jesus Christ, so often remain silent?

THE POWER OF LOVE    part II of IV

According to Paul, the only way to escape this snare of the fear of man is by calling out to God, knowing that He has not given us a spirit of fear but of power, love and a sound mind. God alone can give us the ability to escape being governed by the praise or the criticism of people.

Furthermore, the Scriptures tell us, “There is no fear in love; but perfect love casts out fear...” (1 John 4:18, NKJV). The love of God will not only drive out fear, but it will compel us to go back to those who are living without God in order to do them good, irrespective of their response toward us.

No doubt Jesus had the power to resist the accolades of man. The Bible tells us, “When Jesus therefore perceived that they would come and take him by force, to make him a king, he departed again into a mountain himself alone.” (John 6:15)

We know that Jesus was so full of the love of God that He allowed Himself to be given for the needs of the very ones who opposed Him. When people walked by His cross and reviled Him, wagging their heads and gambling for His garments, the only thing that came out of His mouth was, “Father, forgive them, for they do not know what they do.” (Luke 23:34)

This is the perfected love of God! It is this perfected love that will empower us to do what we are called to do in this generation—to love those who hate us, for their souls’ sake.

On the other hand, the one who fears is not perfected in the love of God. He is as the blind man who was touched by Jesus yet only saw people as trees walking. (Mark 8:22–25). In other words, this man had only half a vision. Similarly, when you and I do not have a heart to see people the way God sees them; we will be driven back by their hard looks and condescension. However, when that blind man was willing to be touched by the Lord a second time, he lifted his eyes and suddenly saw all men clearly.