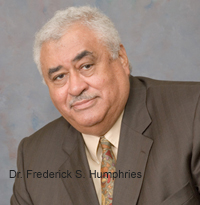 As I watched the recent Democratic debate in Miami, it occurred to me that the core of the

discussion was on what our Democratic candidates would actually do (details) to support immigration reform to the benefit of the Hispanic/Latino communities in an attempt to earn their vote. I also have observed that the biggest differentiation in votes between Hillary and Bernie is the African American vote. We voted in greater numbers (>80%) for Hillary in South Carolina than we did for the first African American President - Barack Obama. I think we can all agree - That's commitment.

This will be the third election (technically second) in a row where African Americans are determining who will be the democratic nominee and most likely the next President of the United States. Where are the specific programs that benefit our community for Social Justice and most relevant to my expertise - Higher Education?

As a former HBCU President that has supported Hillary Clinton, with all the talk of free tuition and what the perceived implications are to both Public and Private HBCU's, I can't in good conscience watch without asking, where is our communities debate or public discussion on the higher education of African Americans, in particular HBCU's?

I read that Bernie would provide free tuition to all public Colleges and Universities. How and what is the implication to HBCU's? I also have read about Hillary's intent to set aside $25 billion over 10 years for HBCU's. But how and to what end? What are the focal points of this money?

How does free tuition and set asides help HBCU's not only survive but thrive and compete at world class levels? I think before the primaries are over we need specifics on how each respective candidates platform helps one of the pillars of the African American community - The Historically Black College and University (Public & Private)

Highlights of critical issues that need to be discussed in detail:
1. Providing free tuition + Pell Grants to Pell eligible students - this would solve the issue of       favoring Public over Private HBCU's.
2. Public/Private Models to incentivize student       preparation for "High Paying" jobs in the STEM       Fields with HBCU's as a key incubator of talent
3. Endowment Grants through federal matching programs that enhance private contributions to HBCU's that support African American students in the STEM fields.
4. Lastly, this may be the most critical isssue to be discussed - The Validation and Verification on the progress of desegregation agreements between the (Southern) States and the Office     of Civil Rights, Department of Education resulting from the "Adams Case". Almost every state   in the South is backsliding - not so quietly - back into separate but equal status.

Our community is watching, waiting and ready to listen to detailed plans to support HBCU's with as much vigor as any other major issue plaguing any other voting group...