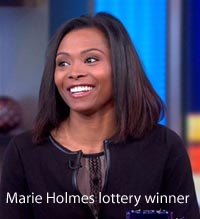 Written By James T. DeShay
I woke up this morning seeing one of the saddest stories I have seen in awhile. It is truly sad for a number of reasons, and I will try to explain several of them. We all waste money from time to time; however, when we waste money, it normally does not make national news for others to state their opinions of it.

Earlier this year, a young African American Female by the name of Marie Holmes was thrust into the national spotlight by winning a Power Ball Jackpot worth $188 million. She opted for a lump sum of $88 million.

Ms. Holmes was interviewed by several news outlets after coming forward to claim her prize. She

seemed to be the perfect candidate to receive this blessing, as people enjoy seeing hard working individuals who are so deserving of achieving a piece of the American Dream in an instant.

Ms. Holmes good fortune was embraced by all, and she was wished the very best as she started this new journey of overnight riches.

Over a course of a few months, the story faded as everyone hoped this single mother of four would realize all her dreams, successes, and goals as stated in her interviews.
Now the ugly truth raises it head, as Ms. Holmes finds herself in the spotlight again - but this time for all the wrong reasons.

Ms. Holmes has been arrested for drug possession, and her boyfriend was arrested for violating probation. What is even more horrific is the disturbing revelation that Ms. Holmes has paid more than $8 million dollars in bond to get her boyfriend (a career criminal) released from jail.
Ms. Holmes adamantly argues that it is no one's business how she spends her money, and no one should judge her.

The truth is we are constantly being judged throughout our life history. No one should expect that people will NOT share their two cents when one's lifestyle becomes public.
Ms. Holmes has created this situation by not seriously taking her obligations to her kids and the community to do something positive with her life.

First and foremost these millions of dollars came from the pockets of millions of hard working people. Though she is not obligated to follow any lawful rules of how she should spend her overnight riches, it is morally unforgivable for her to spend millions of dollars on drugs and bail money for a drug-addicted boyfriend.

The fact that she spent nearly $10 millions on bailing the boyfriend out of jail is morally corruptible. She can't be compelled to spend her money in any reasonable fashion; however, to waste it on an individual who is likely to be in jail for a while is crazy.

After hearing how she wasted such a large sum of money, it is hard to believe that the remaining wealth will ever go to any worthwhile causes. It is also horrifying to believe that any reasonable person would spend or waste money in this fashion.

It goes to show you that no amount of money does a smart person make, as you cannot save people from themselves.