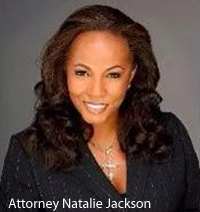 By Natalie Jackson
We Didn't Win The Election But We Helped To Frame The Issues!

After January 6th, I knew that our country was at a precipice and that the hard-fought-for civil rights and freedoms that defined us, as Americas, were at stake. So, I filled out the paperwork to run for Congress on May 23, 2021, after finding out that Val Demings was leaving her seat to run for U.S. Senate.

I was the first candidate to file. I didn't know who else or if anyone else would be in the race, but I knew we needed politicians who understood that we were fighting for the soul of America…democracy, voting rights, and free and fair elections. When qualifying was over and all the candidates had filed, there were 10 Democrats and 8 Republicans in this race.

On July 28, 2022, the Orlando Sentinel and AARP had a community forum with all of the candidates. The question was, "What is the most pressing issue of our time?" The other candidates said "the economy," "affordable housing," or "climate change." All great answers. But I answered, "Voting rights. Because without it, all the other issues don't matter."

Since that forum, I'm glad to say that when asked that same question, almost every candidate who was on the Orlando Sentinel and AARP panel with me, including our Democratic Nominee Maxwell Alejandro Frost, now answers the question with my original answer of "Voting rights and free and fair elections."

This makes me happy because, even though I didn't win the election, I helped my fellow candidates see that while we have many pressing issues (from inflation to housing), without the people having a real say in how and who runs the government, we'd live in an authoritarian government with no voice or say in any of those issues.

Last night, I texted Max to congratulate him on his primary win and to let him know that I support him as he goes on to the general election against Republican Calvin Wimbush. FYI...Wimbush stated at the AARP forum that he believes #Trump won the election and women should be made to give birth even in the cases of incest and rape. So, I REALLY HOPE THAT #MAXFROST WINS!!

Last but not least….

Thanks to our generous donors, we raised enough money to pay for our campaign and all the vendors and resources needed to run this year-long venture. We were able to purchase computer equipment and political software, buy social media ads and text messages, sponsor and host campaign events, hire political consultants and campaign compliance contractors, and pay our canvassers a fair wage. PLUS…we were able to and made sure to support LOCAL SMALL BUSINESSES and BLACK-OWNED BUSINESSES.

Thanks also to our incredible supporters and volunteers, who knocked on doors, made phone calls, handed out fliers, waved signs, attended political meetings, called PACs, created social media posts, protested, and rallied with the campaign for social justice, women's rights, and voting rights and encouraged me to keep going. You all were really RIDE or DIE!!

Since last night, I've received many calls and texts of condolences and encouragement. I've also been asked. "What's next?" Long term, I'll continue my work as a civil rights attorney and start my political PAC. And in the short term, I plan on helping:
1. Lj Holloway win her Congressional race in Florida District 4 (Duval, Nassau, and Clay counties), and
2. Karen Green win her Congressional race in Florida District 7 (Seminole, Brevard, and Volusia counties), and
3. Aramis Donell Ayala win her race for Florida Attorney General.

I'll end this post with one of my favorite sayings….ETERNAL VIGILANCE IS THE PRICE OF FREEDOM.

Thank you, everyone! Love you. xoxo