I was out with my wife running errands the other day and the radio was on. I find myself flipping through stations listening for anything interesting. It seems to me that the radio stations that play music, be it secular or otherwise, have a play list with only a few pieces on it and those songs play over and over all day long. After I have heard a piece of music for the second time while on one errand, I start hunting for a new station.

I usually end up listening to talk radio where I try to find out what's going on in local politics, local business or some new cultural twist that I might have missed.

My wife and I were talking when this commercial came on that I had heard many times before, but this time I decided to listen. This commercial was about the Seminole Hard Rock Casino in Tampa. The announcer said that this is the 6th largest casino in the world. The announcer was so proud to tell everyone about this grand accomplishment that puts Tampa on the world map for showcasing one of the largest booze and gambling houses. He wanted everyone to know that this enhanced gambling operation has a lot of floor space and 5000 slot machines. He sounded so proud. He asked a rhetorical question, "What does this mean to you?" Then he went on to explain what it should mean to everyone.

So I asked my wife, "Really; does he really want to know what having the worlds 6th largest gambling and bar room in my backyard means to me?" I had to think for only a second and then asked a few questions of my own.

Does it mean that now I can gamble away my rent money more easily an quickly? Because I know that usually it is the people who can least afford to gamble, are the ones who do.

Does it mean that I should be happy that the original inhabitants of this country, the Native Americans, are finally getting theirs? This casino is built on Native American soil and they can finally get a financial return on the land that was stolen from them so long ago. Really?

Does it mean that you don't have to be in the back alley shooting craps, because now you can lose your hard earned dollars in the lap of luxury, drinking expensive hooch while spinning the wheel for your future?

Does it mean rolling the dice has been so glamorized to the point that now it is okay to partake in this activity when you know that in the end, the house always wins and you will always lose?

So what does it mean to have the sixth largest casino in the world in my backyard? For me, it is a distraction of massive proportions. It is a distraction used to keep us, my people, from working and concentrating on the real issues that matters. It is a diversion used to divert our thinking and actions away from something positive, and self fulfilling to something perceived as glamorous and exciting. Glamorous, you know, diamonds, tuxedos, shaken not stirred, Bond, James Bond. Yeah, that's the glamorous image we get.

I started flipping through the stations again. Instead of hearing an announcer talk for sixty seconds about gambling and drinking, I listened for someone talking about shifting some of that gambling money into our state education system, but failed to find anything. The gambling lottery was supposed to solved our educational financial crisis; but that idea got jacked.

I flipped some more, looking to hear an excited announcer talk to me about creating income for my family. Instead, I heard some joker talk about gambling away my family's future. 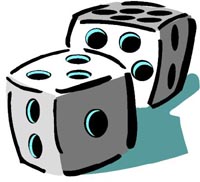 You know, they could have added a thirty second spot of conversation about the king of the household taking care of and respecting his woman but instead the imagery is of one man and many queens.

Even fifteen seconds of engaging dialogue about supporting local Black businesses would have been positive input but they would rather I spend my income in their club on diversions and forget real issues for a minute.

There are so many things that I could be listening to other than these distractions and diversions that really hold my people back. In the end, the announcer did say something interesting. He admitted that gambling could be additive and gave a number to call if you have a gambling problem. The problem Mr. Announcer, is you and what you represent.

Still flipping and finding nothing, I turned the radio off and queued up a CD of positive and motivating conversations.