Such is the case for Black Parramore. We are the prey and the City of Orlando is the predator. Slowly but surely, City Hall has crept up on us and taken our property back to their young. Feeding off of our weaknesses, our once protected borders continue to be driven further and further back. Ultimately, the savvy of the hunters and the inattentiveness of the hunted may cause us to lose one of our most prized possessions: Jones High School.

According to an article titled: "Richmond Heights Elementary Closes: Is Jones 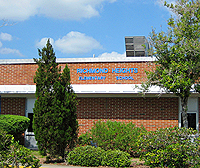 High Next?" published by West Orlando News, we seem to have lost Richmond Heights under curious circumstances. Despite a binding legal agreement entered into by both the Orange County School Board and the NAACP, Richmond Heights Elementary School was dragged back to the liar of the predator as the fruits of a profitable hunt. All the while, the Black Community protested to the top of its lungs. Of course, these demonstrations got us nowhere.

If you think Jones High School is safe; think again. The City has big plans and Parramore is a big part of them. The tentacles of these plans stretch all the way to the Citrus Bowl which is the front door of Jones High. If you don't believe me, just look at an article published by WFTV entitled, "Orlando City Council approves soccer stadium funding," the article had this to say:

"The city has plans to build a stadium in the Parramore area, and has already started buying land for it.

He said the soccer stadium is only the beginning of development planned for the area between the Citrus Bowl, the proposed stadium and the Amway Center.

"We anticipate there will be a lot of fill in the gap, the (Orlando) Magic will bring forward a proposal a couple of council meetings from now, to do $100 million project north of the Amway Center and that will be a catalyst for additional development," Dyer said.

Dyer said this will make Orlando the sports entertainment capital of the Southeast and will pump money into the economy."

As some natives of Orlando might remember, Jones High School has had to be saved from closing in the past. According to an article published by the Orlando Sentinel entitled, "A 100-Year History Lesson At Jones," the article states:

"On a school day in February 1969, nearly 3,000 black students from across Orange County stayed home to save a school from closing.

The next day, the boycott swelled by a thousand, and the school, ultimately, was saved."

Then, there was open conversation about closing Jones High School in 2005. In an article written by Dave Weber of the Orlando Sentinel entitled "Fla. Cracks down on F schools," which appeared on susanohanian.org, the article states:

"Florida education officials cracked down Tuesday on the state's repeat-F schools, a decision that will require Jones and Oak Ridge high schools and Ivey Lane Elementary in Orange County to be closed, handed over to a management company, switched to charter operation or restructured."

Of course, now that Jones High School has a "B" ranking, you would think that would be the security that we've all been looking for. Unfortunately, this may not exactly be true. If you recall, at the time Richmond Heights Elementary closed, the school had a "C" ranking. Kat Gordon and the Orange County School Board closed Richmond Heights based on enrollment, or lack thereof, and not on school performance. But don't take my word for it; just read an Orlando Sentinel article entitled "After 49 years, historic Richmond Heights Elementary closes." The article states:

"Gordon supported the plan because all three schools were under capacity and Richmond Heights was not slated for renovations until after the district's sales tax that pays for construction is set to expire. The academic effects may not become clear for several years. Eccleston has an A grade from the state, Washington Shores has a D and Richmond Heights had a C last year."

To make matters worse, Kat Gordon may have already forewarned us that Jones High may be closing due to enrollment issues. If you don't believe me, just look at her quote about Jones in Dave Weber's article:

"Our enrollment would be so low it would force our school to close," School Board member Kat Gordon said."

I'll conclude by saying this. Just like any animal in the wild, the Black Community has special adaptations that allow us to survive. We don't have to sit idle and be consumed by the beast. In part three of this series, we'll talk about what we can do as a community to ensure our own well-being.