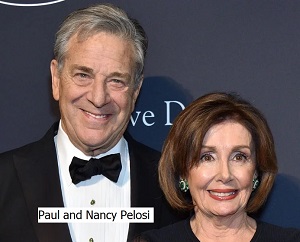 Paul Pelosi was attacked by a 42 year old man David DePape with a hammer, and everyone is mortified that this happened in America. As the midterm election gets closer insanity will reach a higher pitch, because the Republicans can only see red. By any means necessary and violence is at the top of the list.

There are hundreds of militias that are prepared for war, and many of our police and peace keepers are members of these organizations. It is easy to say that they don’t exist, but when they carry their guns to political events they are ready to use them.

January 6th had more than MAGA supporters breaking the law, but it was an insurrection where there was no law. For two to three hours tyranny was allowed to exist, because Ex-President Donald Trump was in control. Democracy was still in control, because January 6th was a three hour controlled violent riot.

Ex-President Trump was allowed to strike the match to initiate a violent riot, and White people were allowed to go home after they made a mess of the Capitol. There was some blood in the street, but very few capitol police used their guns, and the standing order was to let the boys play.

When Trump eventually told his supporters it was time to go home, still no one was arrested. This was MAGA intimidation on January 6th, and when White people carry their guns to the ballot box, it is White people intimidation.

MAGA intimidation is allowed in America in 2022, because the Ex-President is allowed to break the law because he is White. When Democrats and independent start challenging the need for guns in 2022 at political or governmental events, things will change.

There is something wrong in a country where there are more guns than people, and children are taught to shoot guns at age six and seven years old. This is the reality of guns in America and the majority of people refuse to speak up against violence in the country. When the Proud Boys and Oath Keepers sign up as poll workers they will continue to intimidate people of color.

Gun owners in America have three or four guns, and many have six or seven. It does not matter if you live in the city or the country; more Americans feel they need a gun. As prices continue to rise crime will continue to escalate, and there will be gun battles in the street.

Spouses such as Paul Pelosi do not receive a 24 hour security force, and this policy may have to change for federal families. This criminal entered the home from a back door, and the security must improve for all federal families and employees.

There is a need for more security at voting polls and armed militia organizations should not be allowed with guns in voting stations. There should be adequate numbers of polls and the presence of police in the minority communities, allowing voters’ to feel safe. Armed vigilantes in tactical gear should not be allowed to watch ballot drop boxes at any locations.

Intimidation should not be allowed at any poll locations, but it is happening right now across the country. Many election chiefs have left their jobs because of threats and harassment. On October 28th the Department of Homeland Security warned MAGA Republicans could attack election officials to prevent votes from being counted or certified.

Will intimidation and violence determine which party will win the election in 2022?