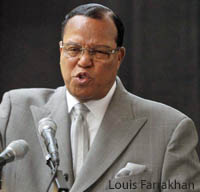 IMO...He is de facto becoming the leading voice of a new militant movement that is an off-shoot of

Many of us didn't really know what "Justice or else" was really about until we watched yesterday. Heck, I didn't think it really meant "OR ELSE" but that is exactly what Farrakhan meant...it was a threat....and (to make it even scarier for the powers that be) he's mixing the "justice or else" call with Nation of Islam beliefs...what some would say is radical Islam (think the Taliban's successful recruitment of young disenfranchised people in oppressed areas all over the world).

You are right Vincent Polite and I have been saying this since Trayvon. I look into the young people eyes when we speak around the country about Trayvon and when I'm invited to speak at "Know Your Right when Dealing with the Police" seminars. I see the immediate rejection in their eyes when someone tells them to "just do what police tell you even when they are wrong and are violating your rights".

What these young people are hearing and what they are thinking when this is said to them is .....just another weak-old-turn-the-other-cheek-sellout telling them to bow down to their oppressors in order to live another day.

This (live on your knees rhetoric) AINT what these young people want to hear and they will not listen to it. I can't blame them...its human nature to want freedom, justice, and equality.

Therefore, because of the FAILED and INEPT leadership of many of our Pastors and Politicians, it was inevitable that a man with a message, like Farrakhan's "Justice or Else", would gain the ear of our young people.

Farrakhan said yesterday to a crowd of one million that he needed "10K good men to take up the call"....I'm sure that today he got at least 10K, if not more, who heard him and will follow.

In conclusion, I think what Farrakhan did was make an opportunity for some BLACK MODERATE/PROGRESSIVE LEADERS (Politicians, Religious leaders, and Activists) to rise up and lead. These leaders need to be like Farrakhan in some ways ( bold and willing to fight for and have unapologetic love for ALL of our people not just the respectable one), like MLK in some ways (able to build sustainable coalitions with allies from all political factions and races) and like the young people on the #BlackLivesMovement frontlines (inclusive and advocates of individual liberties & religious tolerance).

(This is my analysis as a former intelligence officer and amateur historian of what happened yesterday...feel free to debate and disagree)