By Lawrence A Robinson
I led a team that helped Regina Hill get elected as a first time office seeker back in 2014. She had little experience in politics but lots of ambition, drive and a willingness to sacrifice herself in order to improve living conditions for residents of Orlando's District 5. She possesses that special genome that gives her the strength and special reasoning power that guides her through the gauntlet of ignorance and biases as she sprints towards the goal.

I see these same attributes in Shan Rose.

The goal for Regina in that instance, was to gain a seat at the Orlando City Council table, learn how the systems worked and then improve the lives of her constituents as much as was possible from the position of city commissioner.

These are the same things that Shan Rose want now.

Orlando has a strong mayor type municipal government. Commissioner Regina Hill's ability to make real change in her constituents lives, is almost completely controlled by the Mayor's office. It is obvious that the current Orlando Mayor doesn't care much about Regina's constituents, however, she presses forward as much as she can under this administration.

Mayor Buddy Dyer won't allow Commissioner Hill to lead any project that is permanent and sustainable for her constituents. Therefore, District 5 residents remains in a constant state of near failure.

The only real solution that is available to make sustainable changes from City Hall, is for Commissioner Regina Hill to become Mayor of Orlando.

Too often our politicians get caught in the success trap. They do a great job in a political position get comfortable and stay in that position. Politicians that fall into this scenario get reelected over and over again and seldom advance to the next level. This is unfair to the voters who elected them.

Voters expect more service from their reelected politician. When the politician has reached his or her level of competence, they can't give more because of the political power structure of the municipality.

This is the problem in Orlando's District 5 right now. Regina Hill has done all that she can do in District 5 but our communities still need a champion in that space.

When an equal or better candidate comes along and challenges the incumbent, it would be better, if the incumbent relinquish that position and aspire to the next level and allow fresh ideas to continue the work in that space.

By moving up to a more powerful political office, the incumbent and the challenger can unite to move the community forward. This adjustment will be good for both candidates and good for the community as well.

The Orlando Sentinel interviewed Shan Rose as she campaigns to replace Regina Hill in District Five. Their opinion was that Shan Rose is an intriguing and thoughtful candidate, but she didn't offer a very substantive account of how she differs from Hill in either policy or temperament.

In other words, the Orlando Sentinel suggest that Shan Rose and Regina Hill are almost identical.

A critical thinking person will conclude that it's time for Regina Hill to move up to Mayor of Orlando and for Shan Rose to move in, as District 5 Commissioner.

It is for these reasons that I ask the community to draft Regina Hill for Mayor of Orlando by supporting Shan Rose for Commissioner of District 5. 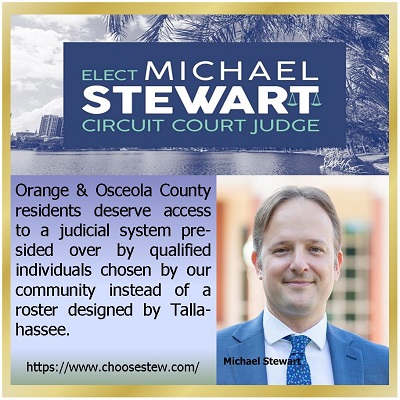