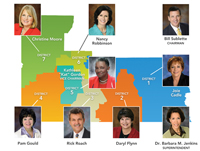 I am imagining a fly on the wall of the board's meetings and workshops. This is a Black fly that lives in and supports District 5 and this fly researched the facts before responding to the frequently asked questions. The Black fly's responses to the boards questions are based on the board's actions, information on OCPS's

web site, public record request of the school board and conversations with parents, teachers, principals and other interested people.

Frequently Asked Questions
What are the needs? Why do you need to continue this tax?

Because we have completely mismanaged and wasted the money from the original tax bonus and our greed requires a continuous supply of new cash. Taxing the community is easier than managing all of this money and we don't want to keep a paper trail. Everyone suffers a little pain in this venture but we take extra money from the District 5 community. No one, not even CTA cares about District 5.

We are asking for pretty much the same thing. It worked so well the first time why change? A sucker is a sucker and will always be a sucker, right?

Lots. But don't ask what we spent it on because that is a secret and we'll just provide you with smoke and mirrors, distractions and diversions when you ask that type of question.

What did Orange County taxpayers get for that amount?

Almost nothing. We closed some schools and opened others. Just shifted things around to look busy and of course those in the clique pocketed a little. Again, I said don't ask that question. The folk in District 5 got a lot of pain and heartache to go along with the broken promises.  But that's all right, no one cares about them anyway. Orange County is growing and we need more schools but not for the Black people. We'll just bus those kids out and close down their schools. We close schools like Richmond Heights Elementary and those student will walk or be bused to other schools. We gave them a carnival to celebrate that closing. The carvinal was a great diversion. We will be closing Jones High School soon. We will have a big festival with clowns and we'll give away trinkets after that.

What other funds are used for school construction?

The school board spends over $200 million a year and we got to get it from somewhere. District 5 is a good source of funds for us. They love us and we love taking their money. Over the last 10 years, the school board has siphoned off over $30 million dollars from that area alone. That's right. Over 30 million dollars that could have been used inside that community for the residents and businesses there. We sure screwed them, (lol).

The Epic Failure Of The Orange County School Board

Why won't all 136 schools be completed?

Are you going to reprioritize the unfinished schools on the "136 list?"

If that will make you happy, okay. But that won't change the outcome of what we are doing, especially in District 5. We are working with the county to decimate that community and build our venues and playground over in the Parramore area. (Is that church demolished yet?) We will build our new school in Parramore but most of the original residents will be gone by then. We love gentrification.

Gentrification creates chaos. Chaos creates opportunity for distraction and diversion. We are only using the gifts from other elected officials and agencies so that we get what we want, which right now is the tax extension.

Do you really need new schools? Hasn't growth slowed enough that you can make do with what you have and add portables?

If all the schools were filled to capacity, we would need fewer new schools. But how can we pocket money from that? Shifting things around create chaos. We make money in chaos. Look at all the apartments that we have allowed to close in District 5 thanks to Mayor Buddy Dyer and Mayor Teresa Jacobs. Even Chairman Bill Sublette, Superintendent Barbara Jenkins and Vice Chairman "Kat" Gordon closed a school in District 5 for lack of funds, then within weeks found a 50 million dollar bonus gift for Dr. Phillips High School. Yeah, $50 million bonus. How cool was that, huh?

How many vacant seats are in the district? Why not rezone the district to maximize capacity?

Because rezoning the students and creating "Island Zones" works much better for us. I think it was School Representative Joie Cadle of District 1 who said, "Those kids like to ride the bus." So some elementary students in District 5 get up an hour earlier and may not get home till 5pm because of long bus rides. Of course, they sleep in class. We blame parents for lack of parenting skills and not letting their kid go to bed early. We blame those parents for everything, lol.  Diverting blame to the victim is good strategy, it always work.

You got to understand, The Orange County School Board wants nothing to do with educating the children of the county. We just want to control the movement of money, period.