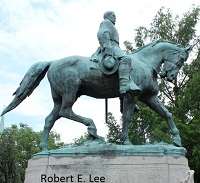 What we should understand about this event is there is still a sizable portion of White American citizens, not exclusively living in the south, nevertheless, substantially located in the south, who still believe that African Americans and all other minorities should be permanently assigned a status of second class citizens. They are threatened by African Americans holding positions of power in this country. And they were apoplectic (out of their minds with rage and fear) when President Obama was elected as the President of the United States. As you may recall this gave rise to the Tea Party whose primary purpose is to, "Take our country back." Take it back from whom? Moreover, who is the, "our", that they are referring to? My sense is that the our is a reference to White people. Thankfully, most White Americans do not see the world through such a narrow bigoted sense.

What has emboldened the White Nationalist to come out and assert themselves lately is that they believe, that they have a friend in the White House, if not the President himself, certainly in Steve Bannon, one of the President's closest advisors. To be sure everyone that voted for President Trumph is not a racist or a White Nationalist. However, what is fair and accurate to say is that most White Nationalist and Neo Nazis that voted, voted for the President. This brings me to another major concern. The President made a quick, measured statement regarding the Charlottesville attack. He condemned violence in the strongest terms but, he erred substantially when he said that the violence was attributable to both sides. It was not. This was a false equivalency. There are not equal contributors on both sides. Rather, the White Nationalist came to the scene stewing for a violent confrontation. They brought their guns and their incendiary words. Further, they were assigned a specific area to protest that was away from the area assigned to the counter protesters. The KKK protesters and Neo Nazis left their designated protest area to confront the counter protesters.

One person lost his/her life today and at least 35 people were injured. A car without a license plate which had tinted windows, drove into the crowd of counter protesters. This was not an accident. Rather, it was an intentional act. It was a well-planned attack aimed at doing the maximum amount of injury to the maximum number of people. The President also erred when he failed to call this event what it is, an act of domestic terrorism. This country has a very troubling history of doing violence to the rights and to the bodies of African Americans, Native Americans, Jewish Americans and Hispanic Americans. We also have an equally long and troubling history of being intentionally silent when the victims of politically inspired violence are minorities, particularly when they are African Americans. We must reject the false notion that terrorism is only perpetrated by non-White individuals.

Today's event involved a local contingent of the KKK asserting their First Amendment right to state their grievances with the government. The KKK's history is one of terrorizing innocent African Americans, brutalizing Jewish Americans and menacing Catholic Americans for hundreds of years. Yet, the President and the press find it difficult to refer to this group as a domestic terrorist organization, or to refer to this act as what it is, an act of domestic terrorism.