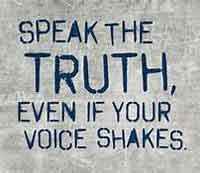 Jesus said "Yes" when Pontius Pilate asked Him, "Are You the King of the Jews?" And Daniel the prophet did it when the king of Babylon asked him to interpret the handwriting on the wall.

Even before Daniel translated the words written on the wall at the banquet, he told the king, "But you did not honor the God who holds in His hand your life and all your ways." (Daniel 5:23, NIV) Just saying that might have been enough to send the king into a rage.

Related Article: The Truth Is The Truth

But Daniel went ahead and told the king exactly what God was saying through the writing on the wall: Your kingdom is over; your kingdom has been given to the Medes and Persians. Fortunately, Daniel did not suffer for his honesty. But he didn't know what the outcome of speaking the truth would be.

Honesty that can be trusted and respected is a very fragrant flower in the life of a Christian.
A. W. Tozer