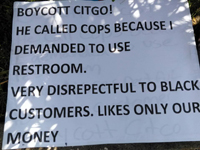 By Lawrence A. Robinson
So, I was driving on Silver Star Rd and turned North onto Pine Hills Rd, and I saw a fellow pacing back and forth with a sign. He was picketing the Citgo station on the corner of the Winn Dixie Plaza. I looked at my temperature gauge and then my clock. It was about 10:30am and very hot. I said to myself, 'No, it's way to hot to be out there in this heat. He has got to be very serious.' I decided to let him be serious by himself, and I drove on about my business.

again. And again, I kept moving. My wife tried to read the sign and suggested that I stop and talk to him, which I refused to stop.

The next day, same thing. He is there with his sign, in this heat. My wife mumbled something. I made a U-turn and parked in the Winn Dixie Plaza lot next to the station. I asked him if I could talk to him and video him, he said yes.

His name is Evangelist Dennis Brown and he lives in the area. He said that he bought $10 worth of gas and then needed to use the rest room and was denied that privilege. The owners told him to go across the street and use the other stations rest room.

He went home and made a sign and came back and started picketing.

I uploaded the video the to FaceBook and it got over 600 views in less than 24 hours.

Evangelist Dennis Brown said that this Citgo station have never allowed anyone to use the bathrooms for 10 years. There are two bathrooms outside and the doors are always locked. There is one bathroom inside for the employees. He said that he is tired of non-Black businesses coming to our neighborhoods receiving our money and going back to their neighborhood and all the while completely disrespecting us. This time he will do something about it.

Because of the video being placed on FaceBook, Evangelist Dennis Brown has received much support. Several people will picket with him on Saturday, 7/16. Others will help with water and towels.

It is obvious Black people are becoming more fed up with the disrespect given to us even as our money is changing hands. It is time for a change and Evangelist Dennis Brown is leading the way in his neighborhood.

Here are some of the comments from FaceBook that captures the mode of the situation when asked, what would you do, if caught in this dilemma?

Never go back again ! And tell everybody about it

I'm no longer a customer of theirs.
They are very disrespectful towards black customers.

Pee on the bathroom door.

We should not spend our money there.

10 years this station has been here with locked bathrooms on the outside. Only in the black community. 99% of his customer's are black. Shows lack of care and respect

I would put my poop in a paper bag and have it delivered by UPS to their gas station every day!!! How is that for an idea??

If I were him, I will filed the lawsuits against Citgo Station refused color of my skin to use the bathroom. Also, copy of police report written up against me.

If you are there Sunday afternoon, we will join you Evangelist Dennis Brown.

I told some people my help was coming, we are unity.