I knew Tim Adams before I met Tim Adams

I knew Tim Adams before I met Tim Adams 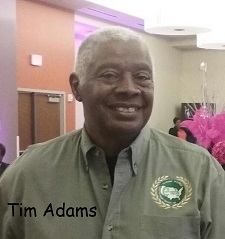 I knew Tim Adams before I met Tim Adams. My oldest brother, George Robinson Jr., and Tim Adams met when both were students at Bethune Cookman College back in the early sixties. They became friends way back then and George would talk about him sometimes.

Years later, after I graduated college and moved to Orlando I heard about Tim because of his high profile generated by his political and social activities. I was talking to George and mentioned Tim's activism and we talked for a few minutes about Tim. I knew Tim before I met Tim.

George, being the oldest brother always debated with me every decision that I made. I later found out that Tim Adams had that same personality. Must be a Bethune Cookman thing.

When I met Tim in person, I found him to be exactly like George and so I treated him like an older brother. He would find a way to oppose almost everything that I would say. Obvioulsy, I knew that I was right, but this kind of challenge made me think more critically of everything that I was saying and doing.

I was traveling all over Orange County working of social projects and was spending lots of my money on gas. I asked the community to chip in $3 for gas. Many people did but Tim said no. He wanted to know exactly what I was going to do with his $3 and wanted to talk to me about it. He wanted to meet for breakfast so we could talk.

A few days later at breakfast, we discussed my plans. He told me everything that he thought I was doing wrong and then told me what I should be doing. The debate was on.

I rejected everything that he suggested in the same manner that I did with my brother. After wards, I would think about what was said and then used some of the nuggets that made sense to me. There was always useful information exchanged during our discussions.

Over the next 45 years, Tim and I met hundreds of times at restaurants, or in my office or at some community event and there was always a debate. We debated who should pick up the check. I think on that score, we broke even.

There was always a debate and there was always nuggets of wisdom exchanged. My critical thinking was vastly improved thanks to Tim. I am going to miss our lunches and our debates. I will miss it all.

Rest In Peace my friend.