A Lynum House Divided Against Itself Can Not Stand

It seems the Lynum House is now divided. This is a hard reality of a sixteen-year legacy of failure. As Malcolm X would say the "Chickens have come home to roost."

Juan Lynum began his campaign with the slogan "Continuing a Legacy of Leadership," riding on the back on his mother - Daisy Lynum. But after a devastating election in which he only garnered 39 percent of the vote, he has shifted his campaign away from that legacy bit.

Read more: A Lynum House Divided Against Itself Can Not Stand

I have noticed that city and county government agency staff members are good for claiming that they don't have authority to interfere with other agency policies. They are more loyal to each other rather than to the people they are supposed to serve. Personally, I look for candidates who are willing to represent the people even if that means questioning another agency's policies and procedures. 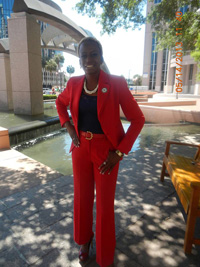 Malaysia Airline - SPECULATION OUTSIDE THE BOX

by Attorney Britt Lyle
MH370-777 Mystery....Gone Without a Trace!!!...and it's still gone.
Hijacked, landed somewhere in China. Salt water & impact begin to trigger flight data recorder (Black Box) pings on aircraft, transponders can be turned off manually, some passengers cell phones were still ringing after disappearance. No oil slick in the ocean so far from aviation fuel, which is lighter than water. Seats cushions float in water as do victims and pieces of an aircraft.

Dr. Kings Death, What Did You Learn?

by Lawrence A. Robinson
On April 4,1968, I was a freshman at Florida A & M University. At about 6:30 PM , I was in my 4th floor dorm room studying. My roommate and long time friend, Samuel Brookins, burst into the room and said, " They killed Dr. King, let's go get 'em."

Read more: Dr. Kings Death, What Did You Learn?

Is 'News One/TV One' A Professional Propaganda Arm

by Attorney taleph Haynes Davis, Esq.
News One/TV One has become the professional propaganda arm of one black-American "journalist", in my humble opinion. As a result, there is now a need for a critical assessment of the issue of the balanced dissemination of information and the "free flow of ideas" directed to and "marketed" to the black-American audience under the allegation that the information/propaganda is indeed "news."

Read more: Is 'News One/TV One' A Professional Propaganda Arm